The improvements could get you a shorter commute

Four of the busiest CTA train lines will get a $179 million investment thanks to a small fee added on to every Uber and Lyft ride.

In Mayor Rahm Emanuel’s 2018 budget proposal, the city rideshare fee was increased by 15 cents to 67 cents. The mayor promised to use the money for CTA improvements and not for other holes in the budget, although specific plans were not introduced at the time.

The millions now generated from that fee will help the CTA repair and maintain the tracks on the Red, Blue, Brown and Green lines. The FastTracks improvement program aims to shave six minutes off an average round-trip commute on these lines through rail, rail ties and electrical power upgrades.

The first phase of the project includes track repairs on the Green Line south of 35th Street, according to the CTA. Worn rail ties will be replaced, which helps support the trains’ weight and makes rides smoother. 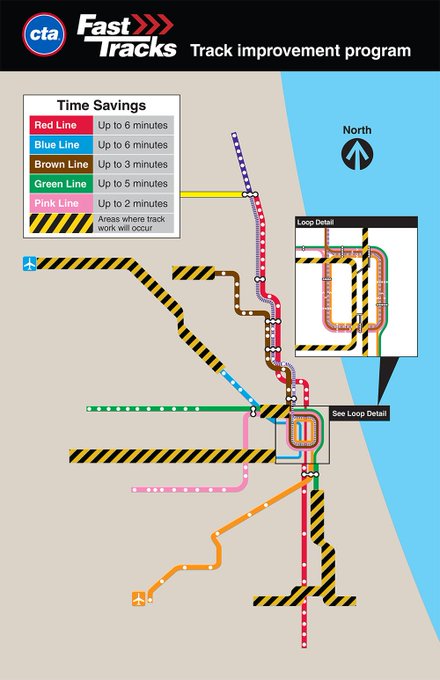 .@CTA is launching #FastTracks, a track repair and maintenance program to provide faster and smoother rides for ‘L’ customers—made possible by our innovative fee on ride-hailing services. #FastTracks will reduce up to 6 minutes off a typical round-trip commute on several lines.

Other rail improvement projects planned in 2018 through 2021 include:

The fee imposed on ridesharing services to fund public transportation repairs is the first of its kind in the country, according to the mayor’s office.

The revenue generated from this fee is particularly important because the state has not passed a capital bill to support transportation and transit projects since 2009.

“CTA still has a significant need for capital investment. FastTracks is a great start, but state support will be critical to continuing investment that’s critical to both maintaining and modernizing our system,” said CTA President Dorval R. Carter, Jr.

Since 2011, the city has invested $8 billion in public transportation modernization, which includes new construction projects and new buses or railcars.