Ford is bringing its fleet of self-driving cars to the neon-splashed streets of Miami to test out its future commercial plans for robot cars, which include ride-hailing and deliveries, the automaker announced today.

With a pipe organ-style suit of sensors on the roof and the Spanish word for “research” emblazoned below the grille, Ford says its self-driving cars bring the promise of safer streets and more efficient deliveries — and probably more than a few fender benders. The cars arrived last week, and testing is already underway.

Initially, Ford will test two types of autonomous cars in Miami: the aforementioned blue-and-white research vehicles with hardware and software technology by Argo, a self-driving startup backed by Ford; and self-driving delivery cars that Ford last deployed in Ann Arbor, Michigan, in partnership with Domino’s Pizza. Ford said it hoped to eventually have “thousands” of self-driving cars deployed in the city.

But for now, the company won’t say exactly how many it has prowling the streets of North Beach and the surrounding communities. The Argo research cars are currently driving all over the city in autonomous mode while collecting high-definition mapping data. Meanwhile, the Domino’s car (there is only one at the moment) is being operated by a human driver while the company studies how customers interact with an autonomous delivery vehicle. Safety drivers will remain behind the wheel of all of Ford’s autonomous vehicles for the time being, although the company is currently building an AV without traditional controls like pedals and steering wheels, which it plans to release by 2021.

Ford has also built a service center for its autonomous vehicles close to downtown Miami. The new terminal will serve as a home base for Ford’s cars when they aren’t out on the streets and a place where they can transfer data and have their sensors cleaned and calibrated.

Miami will also serve as a test bed for Ford’s forthcoming Transportation Mobility Cloud, an open-sourced platform for cities and other transportation partners that it announced last month at CES. Companies that have announced partnerships with Ford, like Lyft and Postmates, will soon be able to provide ride-hailing trips and deliveries using Ford’s self-driving cars, said Sherif Marakby, Ford’s vice president for autonomous vehicles and electrification.

“We’re really excited that we’re doing this already,” Marakby said in a call with reporters. “We’re not announcing that we’re going to the first city, we’re announcing that we are in the first city. We have a depot. We’re mapping the city. And we’re operating a business. So we’re very excited, and we feel that it does take all of these elements coming together and starting the development in parallel is absolutely the right thing to do, and we feel that differentiates Ford from the others.”

The automaker has been lagging slightly in the race to develop self-driving cars — not necessarily for lack of effort, but because its competitors have moved much more aggressively in the last year. Waymo, the self-driving unit of Google parent Alphabet, is gearing up to launch a driverless ride-hailing service in Phoenix, while GM’s Cruise has said it would launch its own robot taxi service in San Francisco. Uber has self-driving cars picking up passengers in Pittsburgh and Phoenix, and Lyft has teamed up with NuTonomy to launch a small ride-hailing pilot in Boston.

Last year was a challenging one for the Blue Oval, with stagnate sales numbers and awkwardly timed management shuffles. Jim Hackett replaced Mark Fields as CEO right after Ford announced a $1 billion investment in Argo. And last week, Ford president Raj Nair stepped down after admitting to “inappropriate behavior.”

LAST YEAR WAS A CHALLENGING ONE FOR THE BLUE OVAL

Ford has doubled down on its mobility investments, acquiring a handful of transportation software providers and launching its own Google X-style incubator for its research and development projects. At the North American International Auto Show in Detroit, Ford said it would more than double its investment in the production of electric vehicles, promising to spend $11 billion on the technology by 2022.

Miami presents a challenging environment for Ford’s self-driving vehicles. The city was recently listed as the 10th most congested in the world, and the fifth most congested in the US, according to INRIX’s global traffic scorecard. Miami drivers spend an average of 64 hours in congestion per year during peak travel time — or nearly 10 percent of their total drive time. 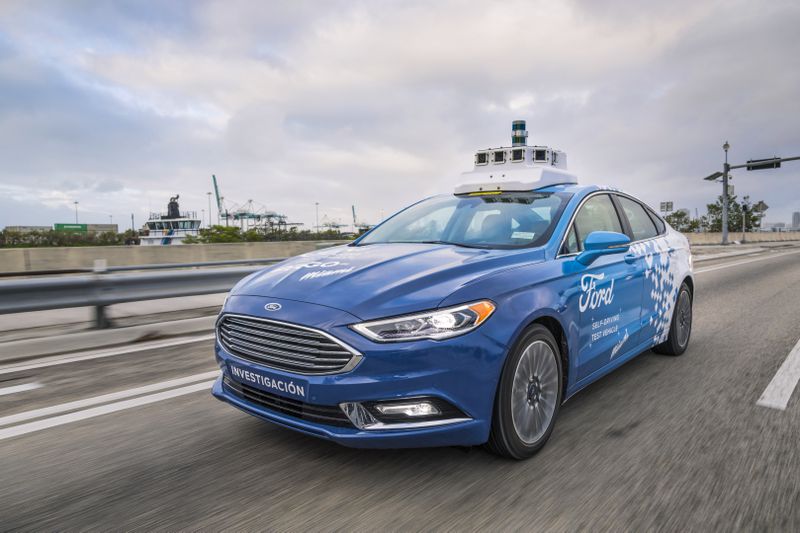 Of course, driverless vehicles are hardly a panacea for traffic headaches. Overly cautious in operation, autonomous cars often get in fender benders with human-driven vehicles. And ride-hailing services like Uber and Lyft have been proven to congest cities, pulling riders off buses, subways, bicycles, and their own feet and putting them in cars instead. Self-driving cars need to reach a level of ubiquity and operational efficiency — platooning, for instance — before they can begin to have any sort of effect on a city’s traffic problems.

Ford and Miami-Dade County are off to a “friendly” start, Marakby said, and the company has “strong partnership” with the county’s mayor, Carlos Giménez. “I’m excited to be working with Ford,” Giménez said in a statement. “We first met with the company over a year ago and discussed the possibility of mapping our community as we prepare for the arrival of autonomous vehicles. I’m a strong supporter of this emerging technology and know that Miami-Dade will continue to be at the forefront of technological advances that will improve mobility.”

Indeed, Miami has been wooing self-driving car manufacturers for months now. City officials tried to lure Uber last year, to no avail, according to the Miami Herald. Last year, one of the newspaper’s columnists made the case for bringing self-driving cars to Miami:

Miami is desperate for driverless cars because it is home to some of the world’s worst human drivers. We’re overloaded with tourists, people who drive according to the customs of their native countries, and elderly drivers. Unfamiliarity with our roads and laws exacerbates hostility already heightened by the heat and humidity, which is cruelly complicated by endless construction projects and horrid urban planning. The only thing good about being trapped in your car on I-95 or Brickell Avenue is that no one can hear you scream.

Have their prayers been answered? Will Ford’s autonomous vehicles bring the relief so many Miami residents sorely need? Most would probably prefer a piña colada by the pool, but the self-driving cars are welcome to give it a shot.