Last June, Richmond, Virginia, made a transportation move few other U.S. cities dare to attempt: It converted two all-traffic lanes along three miles of its two busiest streets into dedicated bus lanes. The politically challenging switch was a key component of a brand new 7.6-mile rapid bus launched by the Greater Richmond Transit Company in 2018 — the city’s first.

In a city that hasn’t seen rail mass transit since the electric streetcars were ripped out in 1949, Richmond’s new rapid bus line, in conjunction with a larger bus network redesign, has attracted a 12 percent surge in ridership, up from 647,000 bus trips per week in October 2017 to 785,000 in October 2018 — of which the BRT line, dubbed the Pulse, handles 40,000.

Despite concerns by some neighborhood groups that the project would accomplish little but disrupting parking availability, the Pulse has far surpassed its initial weekday ridership projection.

Instead of 3,500 weekday riders, it was attracting more than 6,000 at the start of 2019. With strategic upzoning along the route on the part of the city, that rate is expected to climb even further in the future — impressive in an era when most mass transit systems In the U.S. are losing ridership.

“Our old bus routes hadn’t changed in decades. Now we have a new network, including the Pulse, and we are one of only a couple transit agencies in the country right now seeing an increase in ridership,” says Carrie Rose Pace, public relations manager for the Greater Richmond Transit Company.

Despite the fact that the Pulse doesn’t technically constitute the strict “gold standard” long championed by transit advocates, it in many ways embodies everything praiseworthy about the BRT concept, having proven to be a relatively cheap ($64.9 million total cost) way to boost transit ridership in the city by speeding up nonrail public transit in a distinctly branded fashion.

In a country so indelibly wedded to the car and tightfisted with transit funding, these kinds of results are impressive and, some say, just go to show that even for cities where the gold standard is out of reach, planners can still use the broader lessons of BRT to win positive benefits for their communities.

Richmond isn’t alone in its BRT efforts. For a small but growing number of U.S. cities, the return on investment BRT offers is quite attractive.

“A lot of mid-sized cities are showing interest in BRT, in part because they recognize that if they want to do a big capital investment, rail is usually just so much more expensive that they are not going to be able to find the funding to support it,” says Scudder Wagg, senior associate with the transit advisory company Jarrett Walker + Associates. “So BRT-type of investments are much more realistic.”

Cleveland’s HealthLine is considered one of America’s premiere BRT lines. Launched 10 years ago, it is similar in scope to the Pulse. Along with a newer counterpart in Hartford, Connecticut (CTFastrak), it is the highest ranked system by the Institute for Transportation and Development Policy, which awarded it silver status based on its service planning and infrastructure. (No fully implemented American system yet holds gold status.)

Local leaders celebrated the 10th anniversary of the system last November, highlighting its role in the renewal of the formerly derelict Euclid Avenue corridor. Boosters claim the presence of rapid transit helped spur more than $9 billion in private investment along the route, which serves several employment hubs and the old downtown. A variety of BRT techniques were used to speed up the system, including reducing the number of stops from 108 to 36 and only using the onboard farebox late at night.

Toward the end of the year, a BRT line is expected to debut in the East Bay, connecting Uptown Oakland, California, to a BART station nine miles away. Eugene, Oregon, has continued expanding its system, first launched in 2007.

An Alternative to Rail 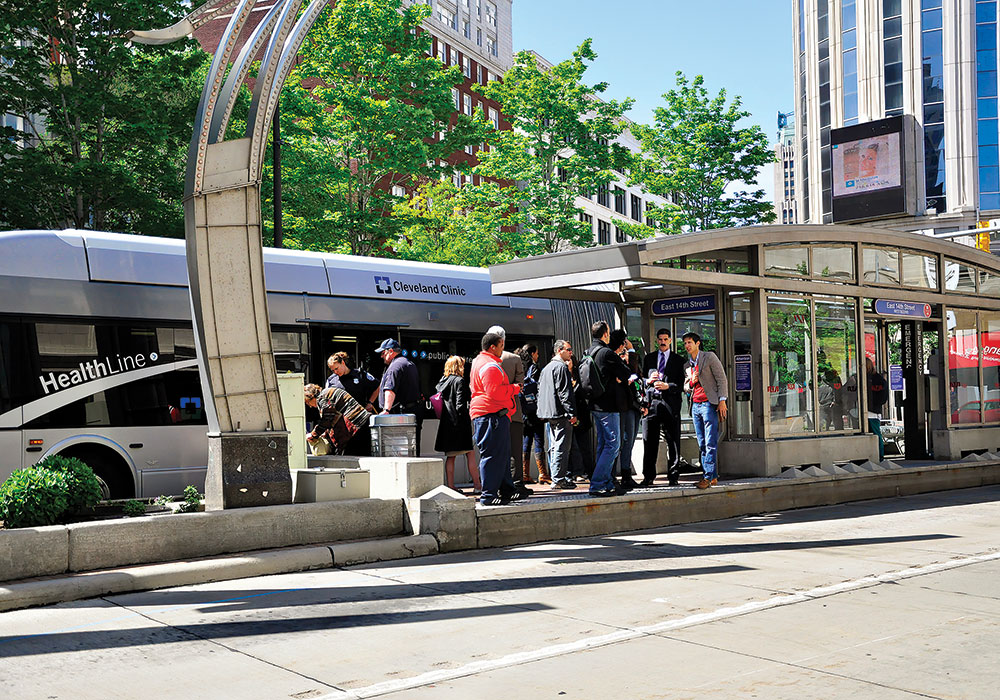 Cleveland’s HealthLine was launched about a decade ago. It is one of the two highest-ranking BRTs in the U.S. Photo by Mariana Gil/Embarq Brasil. 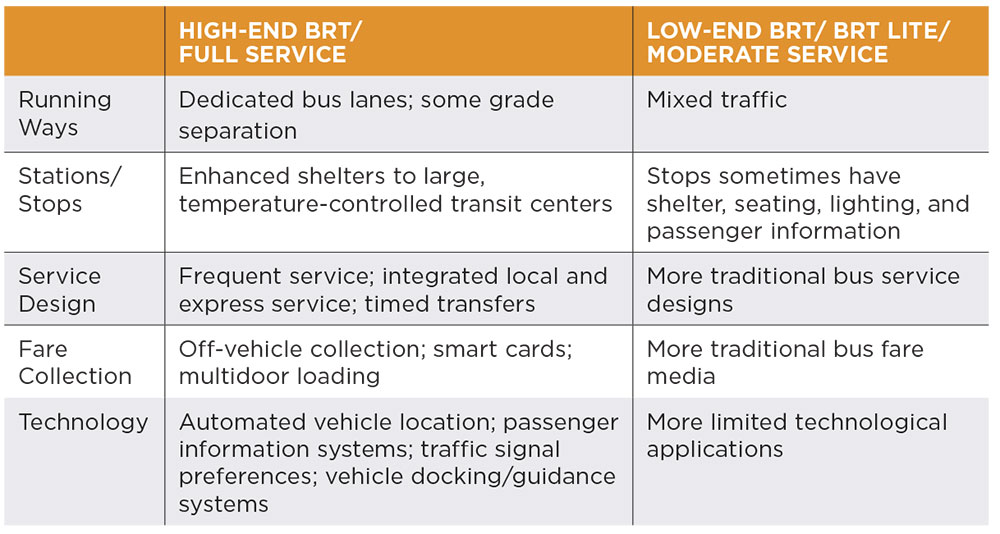 Source: The transportpolitic.com. Graphic by Haisam Hussein based on graphic by Yonah Freemark.

Bumps in the road

One of the most notable BRT achievements is in Albuquerque, New Mexico, which debuted a rapid bus line in late 2017, earning accolades from ITDP. The advocacy organization usually waits six months after a system debuts to give a ranking, but in Albuquerque’s case it made an exception because it included many BRT best practices, including dedicated busways, frequent service (every 10 minutes), stations where fares can be collected prior to boarding, and an all-electric fleet.

“The committee decided that it made sense [to bend the rules] because it was such a huge effort in the U.S.,” says Michael Kodransky, the U.S. Director for ITDP.

But then the system hit a big snag, as the electric buses it commissioned ended up needing far more frequent recharging than first thought. The manufacturer had promised they could last 275 miles between charging, but once on the ground in Albuquerque, that number dropped to about 175 miles; the buses proved incapable of handling both the passenger load and the New Mexico heat.

The system is currently on hold until diesel buses can be obtained and likely won’t be up and running again until 2020.

From a design perspective, Kodransky says, the system is still impressive.

“We are waiting to see what happens once they procure new nonelectric buses,” says Kodransky. “They were the first to try electric buses, and hiccups are not unusual in the beginning, which is usually why we wait to give the distinction.”

Despite these hitches, Kodransky says he is optimistic about the future of BRT and its derivations, in part because there is so much unmet demand for good transit.

Worldwide BRT ridership is stagnating, with ridership slightly down from a couple of years ago (from 34.6 million riders a day in 2017 to 33.7 million today, according to Global BRT).

But in the U.S., he argues, the possibilities are nearly limitless because there is such a large amount of pent-up demand for noncar travel and so many opportunities to meet it.

“In the U.S. [BRT] is still very much a solution that cities are figuring out how to build,” says Kodransky. “I think things are hopeful — the East Bay project has a lot of potential, Minneapolis has a lot of potential, and the Pulse in Richmond is really hopeful. The Richmond corridor carries double the number of people they thought it would carry, which is not a lot by international standards but is a lot for Richmond.”

The case for a la carte

For practitioners like Wagg, there is also a sense that the lessons of BRT can be applied to traditional bus systems. In many cities, where concerns about parking or travel lanes will probably overwhelm the capacity to institute a gold standard BRT, individual aspects of this infrastructure can still be applied more widely — perhaps in conjunction with one central line that comes closer to the ideal.

San Francisco’s entire bus system, for example, has adopted the all-door boarding, which is a staple of BRT systems. In some communities, signal priority for buses, which causes traffic lights to change to accommodate the more densely packed vehicles — another BRT standard — is becoming a norm. In Richmond, the network redesign that accompanied the roll out of the Pulse included BRT-like aspects as well.

“I hear a lot of criticism about BRT projects getting watered down or being little more than a slightly better bus,” says Wagg. “But in a lot of ways that’s a sensible thing to do, because on a lot of busy bus corridors in this country you don’t need to build a gold standard BRT. You just need to apply a lot of the pieces and tools that you would use on a BRT corridor.”

Another lesson from Richmond’s efforts is that planning for a BRT route requires patience, as with light rail or streetcar lines. When first articulated and branded in the early years of the 21st century, rapid bus lines were promoted as a cheap alternative to rail, which established a perhaps unrealistic expectation that BRT would be easier and faster to build than its rail-bound cousins.

That hasn’t been borne out. In Richmond’s case, the studies for the line that would become the Pulse began in 2010. Even though so many things went right for the Virginia project — from a sizable federal funding infusion in 2014 to a launch date that arrived on time and on budget — the entire process still took around 10 years.

“It took a decade for us to get here,” says Carrie Rose Pace of GRTC, when asked why she thinks more cities haven’t pursued similar projects. “I think it can be challenging for people to see a 10-year project through when they are thinking, ‘oh, I need this now.’ But we couldn’t just snap our fingers and make it happen.”

That means 10 years from now, the Pulse could well be in the position Cleveland’s HealthLine is in today. It may have even grown — something that its predecessors in the U.S. have yet to do.

Preliminary studies have shown how the Pulse could be expanded westward or eastward into the suburban county that surrounds Richmond, though Pace admits there is no timeline for such elongation of the system. It’s all dependent on funding in the future. Nonetheless, “we expect to continue to grow,” she says.

Jake Blumgart is a writer and editor based in Philadelphia.